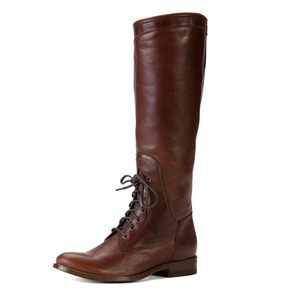 Amidst the dozens of boots I own these Frye ones are my favorite. They started to die a slow death months ago because I wear them year round, rain or shine, dresses and jeans, formal and day time. Whatever. I’ve been known to show up at a 15 person formal sit down dinner in these boots, granted it was at the Chateau, where anything goes but still, my mother would have yelled at me for sure. So after many months of putting it off and denying how badly they were beat up (two holes the size of half dollars on each sole… yes, that’s right, shameless…) I finally took them in, expecting a death notice. However, the miracle worker at Fast & Best Shoe Repair (the name says it all doesn’t it?) literally brought them back to life. Within a week my boots were back in business. I would show you the before & after photos but the before is just too humiliating and the after is almost like new so the above will due.