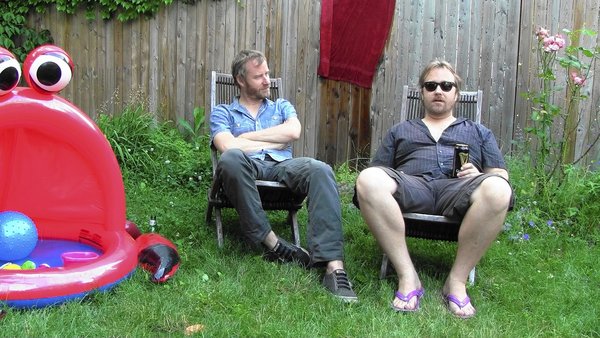 The best documentaries are the ones that veer fearlessly into an unknown direction, where the viewer uncovers layers both painful and painfully funny, that the director himself may not even realize until the editing room. That is the brilliant film Tom Berninger made while attempting to make a “doc rock” on his older brother (by nine years) Matt Berninger’s band, The National. Shot in 2010 during the band’s tour for their “High Violet” album, Mistaken for Strangers is a beautiful first film about music, life, love, loss, family, and the complicated nature of being brothers. Kind of by accident. With the film’s editor Carin Besser, the final product digs unexpectedly and without hesitation into the things that make life the complicated animal it is. Tom’s quietly raw and insistent way with the camera, often times turned on himself, and a desperate desire to tell his own as well as his brothers story unfolds in unexpected ways and ends not so much with a cliff hanger but a look from the precipice. Though there are great moments and glimpses of the band the film is truly a story of family dynamics and the curse and blessing of being an artist, whether visual or musical. The nature of a highly creative person and how it can unfold in success and failure and where the two collide and explode. Levi’s, who sponsored the film premier screening and after party on both coasts, has a history of supporting artists in the best way possible: helping their art be seen. Thanks for putting your creative money where your mouth is. The film opens this Friday in select theatres in Los Angeles and New York. Go see it. Trailer below.