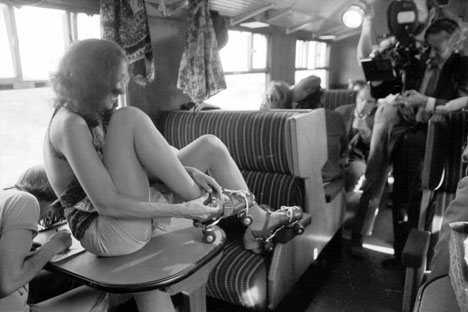 This Sunday, January 13th at 7:30pm legendary artist and filmmaker Carolee Schneemann is going to be at the Los Angeles Filmforum with new video work. I interned with Carolee many years ago while studying film at Bard, she is amazing and her work preceded that of Karen Finley and other revolutionary performance artists. I won’t be able to be there Sunday as I will be in lockdown at the Beverly Hilton for Golden Globes but if you are interested in the old Avant Garde, and are not booged down with the night’s other festivities, this is one of film’s reigning experimental queens and really worth seeing. It’s a pretty cool and rare opportunity to meet an artist like her and see her work up close. “Carolee Schneemann: New videos of the Performing Artist” will be at the Spielberg Theatre at the Egyptian, 6712 Hollywood Blvd., Los Angeles CA 90028. Tickets are available online or at the door. She also has her early paintings/constructions in a group show at THE BOX, “Painting” (how painting became performance). And Schneemann is also on a panel at The Box Saturday Jan 12 at 5 pm with Barbara Smith, Paul McCarthy and others.