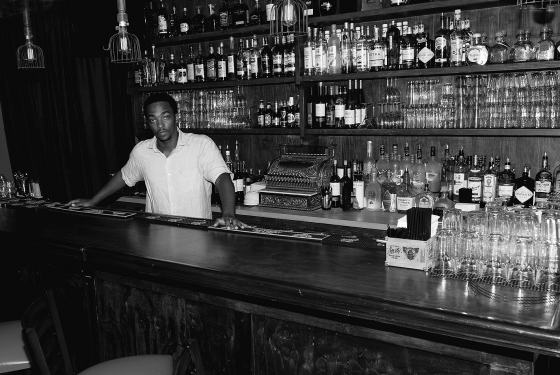 One of my favorite actors and all around cool guys Anthony Mackie just opened a bar in Bed-Stuy! The opening for No Bar was this past Monday which was awesome luck since I was in town for it. Our friend Jason (another uber-cool gentleman) manages Anthony who I first met at an Oscars party in LA a few years ago. Anthony had just started building a house in New Orleans at the time which is where he lives when not in New York or LA. The bar is amazing and he built a lot of it with his own hands and opening night he was serving drinks himself, alongside his bar staff, while making sure everyone got a taste of his famous NOLA style red beans and rice (which you get free on Mondays) and his insanely good meatballs (yes, I jumped happily off my vegetarian wagon for a taste of those). While sipping Anthony’s version of the classic Sidecar (“No Car” on the menu) I spent twenty minutes talking with Sam Rockwell about movies and the Lower East Side where it turns out we are neighbors but didn’t realize who he was until he was long gone. He did say his name was Sam and he was an actor and he looked like someone I know but none of that seemed to help in the moment. Thank God I didn’t ask if we went to camp together… He was uber-sweet and dressed in rad vintage threads, having come to the opening straight from seeing a play. Did I mention Samuel L. Jackson was also there? Dressed in white and looking hot and dapper. The bar is an easy ride on the A/C line and you get off at the Nostrand stop which drops you a block or two away from the bar at 608 Nostrand Ave Between Pacific and Atlantic (also known as the local route to JFK in case you need an alternative to the BQE next time you fly to LA…) Photo by Jennifer Cooper