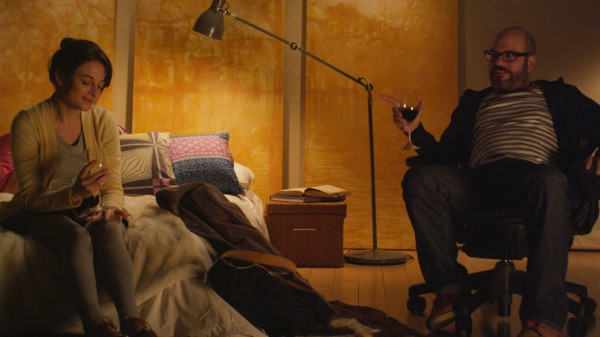 Yesterday as I was walking through midtown on a very warm sunny day I realized that ninety percent of my summer wardrobe is silk. Should make for an interesting sweaty summer in the city. Just as I was planning my means of escape from the humid hell that calls itself New York City in the months following the freezing hell, I got a pleasant email in my inbox listing all the cool films Industry City is screening on rooftops this summer, including some of my Sundance favorites like Appropriate Behavior, Kumiko The Treasure Hunter and a preview of Gillian Robespierre’s upcoming A24 release Obvious Child on Saturday, May 17th. A full list of the films below.

10,000KM (Long Distance) (Carlos Marques-Marcet | 99 min.) Special Sneak Preview
Part of Rooftop Films SXSW Weekend
Separated by 10,000 kilometers, Alexandra and Sergi must rely on virtual communication to keep the flame of their relationship alive. But with their realities no longer shared and the touch of one another gone, the technology that has supposedly brought the world closer together may just tear them apart.

Appropriate Behavior (Desiree Akhavan | 82 min.) Special Sneak Preview
Shirin is struggling to become an ideal Persian daughter, politically correct bisexual and hip young Brooklynite but fails miserably in her attempt at all identities. Being without a cliché to hold onto can be a lonely experience.

Cold In July (Jim Mickle | 109 min.) NY Premiere
Jim Mickle’s Sundance hit is an ostensible thriller-cum-revenge flick, harking back to 80’s b-movies and delicately crafted around a simple premise that turns out to be anything but. Courtesy of IFC Films.

The Deadly Ponies Gang (Zoe McIntosh | 65 min.) International Premiere
Clint and Dwayne are two of a kind. The kind that start a pimped-out pony gang (ponies replete with glitter, oversized sunglasses, and bling) on the edges of rural New Zealand. Riding through town the duo deals some drugs, tries to snuggle up to some ladies, and attempts a fundraiser for new teeth while learning the lengths people will go for their mates.

The Disobedient (Mina Djukic | 112 min.) NY Premiere
Running through life with wild abandon, lifelong friends Leni and Lazar set out on an improvised countryside bike trip. Like tiny tornadoes they whirl around rural Serbia resulting in the type of destruction that can only come from true, disastrous love.

Five Star (Keith Miller | 82 min.)
Free Show. In a blend of fiction and reality, Five Star explores the relationship between two men – Primo, a five star general in the Bloods, and John, a young man trying to decide whether gang life is the path for him. As Primo mentors John in the workings of the gang world, a secret threatens both men’s futures. Winner of a Rooftop Filmmakers Fund grant.

Forest of the Dancing Spirits (Linda Västrik | 104 min.) NY Premiere
Deep within one of the world’s last untouched rainforests lives the Yaka/ Mbendjele tribe, a group of hunter-gatherers from the Congo Basin, who are about to discover the Western world’s intense lust for “progress.” Beyond just an ethnographic study, award-winning filmmaker Linda Västrik imbues each lush frame with humor, heartbreak and vibrant storytelling.

A Girl Walks Home Alone At Night (Ana Lily Amirpour | 107 min.) Special Sneak Preview
A mysterious female vampire haunts an Iranian ghost town and falls for one of its alienated locals in this fantastical black-and-white romance. Produced by Elijah Wood, the Sundance-acclaimed title is a daring, original take on the genre.

The Infinite Man (Hugh Sullivan | 84 min.) New York Premiere
A man’s attempts to construct the ultimate romantic weekend backfire when his quest for perfection traps his lover in an infinite loop.

Kumiko, The Treasure Hunter (David Zellner | 105 min.) Special Sneak Preview
Austin-based filmmakers the Zellner brothers return to Rooftop with a touching absurdist odyssey starring Rinko Kikuchi as a Japanese woman who believes Fargo is a true story and ventures to Minnesota in search of the stolen money hidden during the classic Coen brothers film.

The Last Season (Sara Dosa | 90 min.) NY Premiere
Sara Dosa’s insightful directorial debut introduces viewers to the world of mushroom hunters in Chemult, Oregon, charting the relationships that are cultivated between men and nature, and attesting to the power of families we create.

Mateo (Aaron I. Naar | 85 min.) NY Premiere
Part of Rooftop Films SXSW weekend
Matthew Stoneman, a ‘white guy’ from New Hampshire, learned to play authentic and fluent Spanish songs while serving time in an LA prison for robbery. At once his worst enemy and greatest fan, this is the unlikely story of Matthew (Mateo) busking the streets, traveling to Cuba and attempting to record his newest bolero record (romantic Latin tunes).

The One I Love (Charlie McDowell | 91 min.) Special Sneak Preview
A married couple on the brink of separation escapes to a beautiful vacation house for a weekend getaway in an attempt to salvage what’s left of their relationship. That’s about where normalcy ends in this highly original, dizzyingly bizarre directorial debut from acclaimed author Charlie McDowell. Courtesy of Radius-TWC.

Ping Pong Summer (Michael Tully | 92 min.) NY Premiere
The year is 1985. Rad Miracle is a shy 13-year-old white kid who’s obsessed with two things: ping pong and hip hop. During his family’s annual summer vacation to Ocean City, Maryland, Rad makes a new best friend, experiences his first real crush, becomes the target of rich local bullies, and finds an unexpected mentor in his outcast next-door neighbor. Ping Pong Summer is about that time in your life when you’re treated like an alien by everyone around you, even though you know deep down you’re as funky fresh as it gets. Courtesy of Gravitas Ventures.

Pulp (Florian Habicht | 93 min.) Special Sneak Preview
One of the greatest bands to come out of the ‘90s is captured in this intimate and imaginative documentary, structured around Pulp’s final concert in their hometown of Sheffield. Pulp is a music-film like no other – at once a concert film, a nostalgic look back at an iconic band, and a thoughtful and sweetly charming tribute to the hometown fans that fell in love with them. Courtesy of Oscilloscope Laboratories.

R100 (Hitoshi Matsumoto | 94 min.) NY Premiere
When a mild-mannered Japanese mattress salesman joins a hidden, mysterious S&M club that specializes in surprising its clients in public and applying sadistic, sexual torture in any place at any time he soon realizes the price for pleasure may be too high. Courtesy of Drafthouse Films.

The Search For Emak Bakia (Oskar Alegria | 84 min.) NY Premiere
In 1926, the Surrealist artist Man Ray created an experimental film titled Emak Bakia, shot along a forgotten stretch of the Basque coast. Today, a filmmaker retraces Man Ray’s steps by foot, using chance and the wind to guide him in this poetic, indefinable documentary.

Skanks (David McMahon | 84 min.) NY Premiere
A small community theatre in Birmingham, Alabama mounts an original drag musical, “Skanks in a One Horse Town.” The cast of amateur performers bond to form a family of sorts while creating an unconventional show in the religion and football-obsessed south.

The Skeleton Twins (Craig Johnson | 90 min.) Special Sneak Preview
Living separate lives on opposite sides of the country, estranged siblings Maggie (Kristen Wiig) and Milo (Bill Hader) are at the ends of their ropes. But after a moment of crisis reunites them, Milo goes to spend time with Maggie in the small New York town where they grew up. Courtesy of Roadside Attractions.

Thanksgiving (Adam Newport-Berra | 85 min.) World Premiere
Alex & Amy are the perfect Brooklyn couple. They have a cat, a Thanksgiving table of bohemian friends, and a glowing future together. Yet the sudden holiday appearance of Amy’s mysterious brother Will quickly disrupts their idyllic lifestyle and calls into question what we’re truly “thankful” for.

The Trip To Italy (Michael Winterbottom | 115 min.) Special Sneak Preview
Steve Coogan and Rob Brydon reprise their roles as themselves in this follow-up to the acclaimed The Trip in yet another off-the-cuff food adventure. Six meals in six different places on a road trip around Italy. Liguria, Tuscany, Rome, Amalfi and ending in Capri. Courtesy of IFC Films.