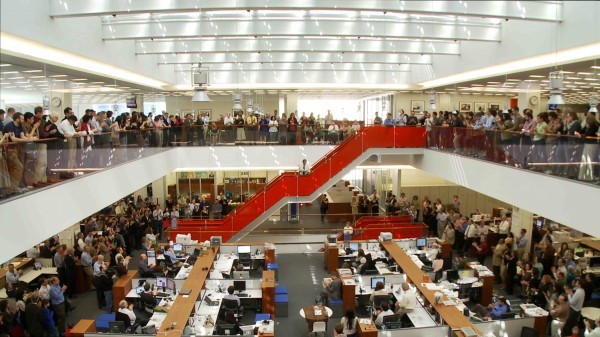 I was genuinely disappointed when I didn’t have the chance to see Andrew Rossi and Kate Novack‘s documentary Page One at this year’s Sundance but thankfully someone thought to invite me to a press screening of the film tonight. I am a total media junkie so biased as hell but I think Page One is one of the most important films to be made in the last decade. Whether you work for Vogue or Vice you will find it fascinating. And in the end the overall sentiment is no doubt that old school journalism is not only relevant but also necessary. So to everyone who thinks that blogs are the only thing that matter now, please, watch this and think again. Yes, print journalism will never be the same, but blogs are contributing to the dialogue not replacing it nor taking over. My favorite part of the film is when David Carr is at a media conference along with Newser founder Michael Wolff and he picks up a layout of Newser’s front page… with all of the classical media outlets that Newser has sourced for their content cut out of the layout… Yes, I am a media whore and this was pure media porn and you know what? I loved every minute of it. And I got a chill during the scene above when New York Times’ Executive Editor Bill Keller is about to announce the Pulitzer Prize. The film opens in select theaters this June.