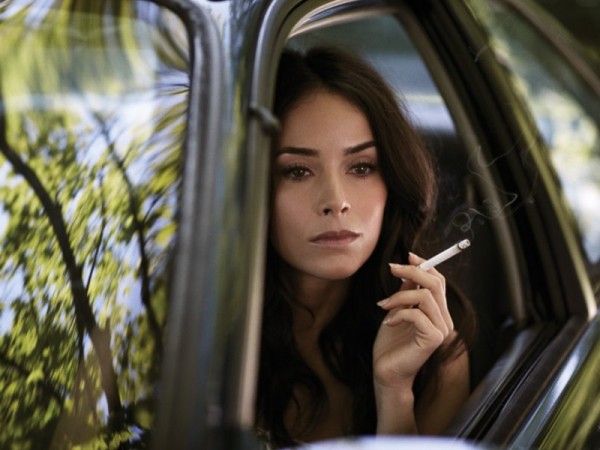 During the actual festival at Sundance it is really hard to catch everything you want to see and because I knew I would eventually see (and love!) the Sundance Channel’s new original series Rectify I missed it while in Park City in exchange for catching some of the other hard to find films. That said, I was really excited to get an invitation last week to a roundtable with some of the cast from the show including Abigail Spencer who is a doll and who I’ve met many times at events in LA. We sat for a couple of hours with her and her onscreen brother Aden Young and on screen step-brother, Clayne Crawford at the Beverly Hilton, talking about the show and the show’s creator Ray McKinnon. I got hooked on the show, which is produced by the same guys as Breaking Bad, fast and watched all four episodes on the screener in one sitting. It has a great pace, beautifully shot and subtly told. I loved the tension and relationships they built (*and Abigail’s character Amantha’s flower print dresses thanks to costume designer Ane Crabtree. See the QA below for all the brand Abigail wore!) Watch the trailer below and catch the six episode series (and hopefully more to come…) on the Sundance Channel starting April 22nd at 9PM.

C&H: What were some of the brands you used?
Ane: I didn’t so much go after brands. Instead, I looked to see what was the truth of the characters, and design from the inside out. For each character, that meant approaching their emotional state, their economic status…what was happening to them in the few days after daniel’s release.

For Daniel I tried to think on who he was when he entered prison. It was the beginning of the 90s, in a small town. He was into music, perhaps Kurt Cobain, who started in ’91. You will see looks that are classic, and organically simple. Levis jeans, dark navy dickies style button up shirts, old school Adidas trainers. Daniel was a teen when he went to jail, and came out a man. His clothing reflects that.

For Amantha it seemed best to marry the old south with the new. Since Amantha is the only person in the script, save for Jon Stern, the lawyer, not living in the town. I decided that she would be somewhat influenced by current Atlanta street style, still keeping the roots of her small town. This means, flirty flowy dresses that are akin to old school looks by June Carter Cash, with a little bit of bohemian loner thrown in.

C&H: Who makes the flower dress Abigail is wearing in the promo shots?
Ane: Not sure which flower dress….but she wore a combination of Anthropologie, Madewell, Free People, Urban Outfitters, and vintage.

C&H: What is the significance of and story behind the plastic watch she’s wearing?
Ane: I’m trying to remember if I picked that out and/or if it was props. The watch became something of a tie to her past. A past where the one thing that was a constant, was her own time being married to daniel’s cause. The watch is a reminder of that, and it’s old fashioned, and slightly discordant, with what she is wearing. Something to throw a little conflict into the frame.

C&H: What was the inspiration for the costumes and how did you approach each character’s personality through their costumes?
Ane: Well, I think I started that answer in the first question-sorry:)! Basically, because Ray the director is from the south, as am I, I just wanted the truth of the beautiful south to come out. There are plenty of cliche’s about the south. I felt the need to celebrate it’s ancientness and it’s current modern love of the old way, old customs of dressing, through the characters given. In this instance, I’m lucky, because we also have characters who have been somewhat frozen in time. They have been held in a time warp, a limbo-awaiting some shift because of Daniel’s death sentence. It seems as soon as he is realized, or rather, with a bit of time, the limbo releases a bit, and so do their clothes. Jon Stern is different from the group, as he is our one east coaster. He is a lawyer who hails from New York, and I think it’s apparent that he sticks out in the frame.