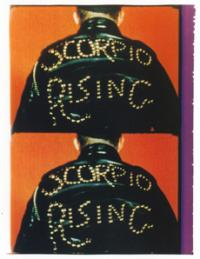 The 2nd edition of Kenneth Anger by Alice L Hutchinson published by Black Dog Press is being released in September and includes 180 color and black and white film stills. The LA-based Avant Garde filmmaker is a legend for lots of reasons most notably his 1963 classic short film Scorpio Rising, which is a staple for film students everywhere (and how I first got introduced to him).