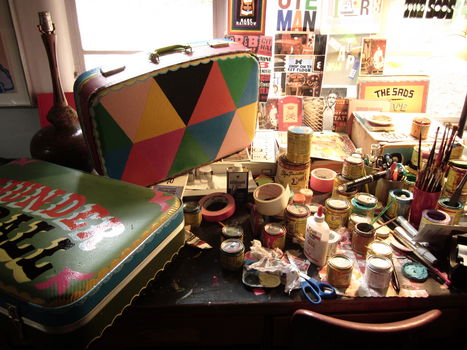 If you happen to be in Berlin check out Aaron Rose’s new show of paintings called TROUBLE at Circle Culture Gallery. Aaron is best known for his own Alleged Gallery in New York and later LA that first brought to attention artists like Barry McGee, Margaret Kilgallen, Mike Mills and Shepard Fairy but he is an artist in his own right as well. He also curated the show and later directed a documentary of the same name, Beautiful Losers which came out two years ago and is SUCH a fantastic film. If you haven’t seen it yet you must. It’s the precursor to Exit Through The Gift Shop if you are interested in amazing art in general or street art in addition to Banksy who I am forever obsessed with, of course. The show runs September 9th thru 25th. www.circleculture-gallery.com