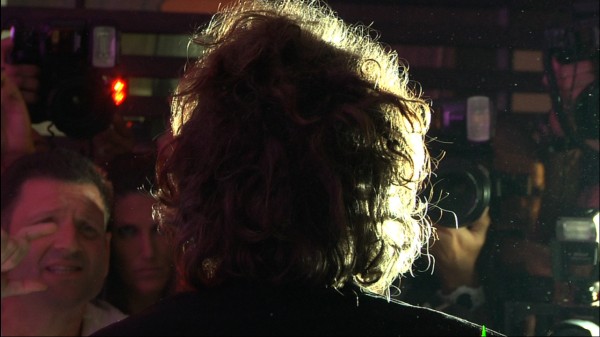 Joaquin Phoenix’s much-anticipated documentary “I’m Still Here” directed by Casey Affleck has something for everyone. A man on a journey, a fumble along the way, a cross roads, failure, and finally redemption. It’s a beautiful piece of performance art. Carolee Schneemann and Karen Finley make note.

There are very few actors who take risks to create gutsy statements on what goes on in our culture and I think this is one of them. I love the pseudo documentary aspect because really who is to say where the line starts and crosses from reality into fiction.

I genuinely loved what he attempts to do not in regard to a music career or leaving acting which he never fully intends but perhaps may have thought of on occasion when those nagging existential questions of meaning and pointlessness plagues us all. This however felt more like an effort to explore ones own boundaries, to exploit oneself in the same way others have done but to control it on ones own terms. What I saw was a really great piece of performance art, which perhaps started out not so much as a hoax but a social experiment and a true effort to escape whatever confines real or imaginary Mr. Phoenix felt.

It’s not hard to understand how someone who has grown up in the world of entertainment would feel drowned by it. But this is not a full on documentary. It’s a commentary and a performance stemming from reality. The character he creates exists in a lot of people in Hollywood, which is stating the obvious. It’s a gamble what he did but I think it will pay off. You can’t fault a man for trying to explore and push his own boundaries.

I got the sense especially in the opening sequences that JP was definitely trying to express frustration with his life without seeming ungrateful for the opportunities he’s been given. That said I think a lot of what went on after the word “hoax” appeared in the media was contrived but there was definitely truth beneath the surface. They say when you get drunk what you say and do has a layer of truth to it and that is what this felt like. An emotional drunkenness that propels an improvisational Cassavettes-like performance. There is rawness in the prostitute scene that is not only calculated but also effective.

One may assume his life had become too redundant and safe in a dangerous way and this was a way to shake it up and create controlled chaos, controlled by him to some degree rather than Hollywood and the publicity machine around him.

Everything is clean, shiny and retouched in the world we live in and this was raw and yes, I believe a lot of it was staged but it’s not far from the truth and so the two begin to run parallel. That is what makes it a great piece of performance art, self-examination and self-ridicule. To call it a hoax is to misunderstand it but to call it reality isn’t accurate either. Reality is a much-maligned word these days anyway and one most of us can no longer identify so perhaps this is the greatest testament to that fact.

There is a great scene in Madonna’s “Truth or Dare” where Warren Beatty says “she doesn’t want to live off camera” and while this is a whole different type of performance piece all I could think while watching it is there is no way JP doesn’t want to act. He doesn’t want to live off camera much less give it up. That said the point of this exercise is not pure narcissism. It’s a cleansing of certain thoughts, desires and fears. It’s an artist exploring his own inner dialogue and making it public, something great actors do all the time through fictional characters written for them and here is the greatest character of all, himself.

The last scene in the river is perhaps the most genuine. An obviously drawn metaphor of a final return to innocence, home and the comfort of the familiar it’s nonetheless necessary to cleanse the audience and JP from whatever just went on. Mr. Phoenix seems too smart to have done this as a hoax but a more believable interpretation is that of a performance piece. JP will live a long and fruitful life in Hollywood but perhaps by his own rules.