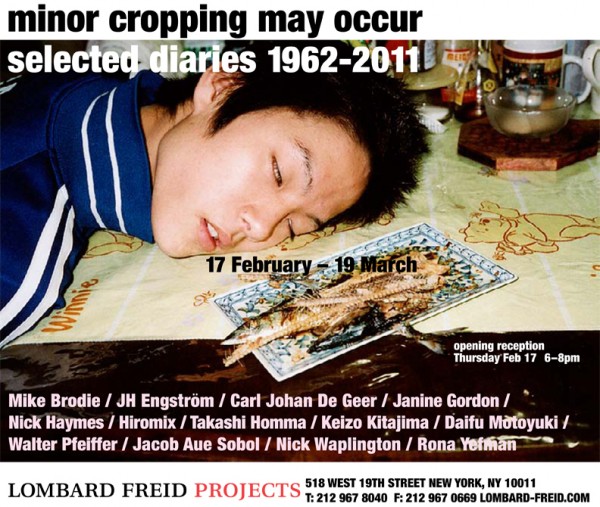 Minor Cropping May Occur (selected diaries 1962-2011), co-curated by Lea Freid and photographer Nick Haymes is opening this Thursday February 17th, 6PM– 8PM at Lombard Freid Projects. Nick Haymes is amazing and has shot for everyone over the years so I was lucky enough to have him do a couple of shoots for us when I was Fashion Director at Russian Harper Bazaar almost ten years ago. He is also married to an old friend of mine who happens to be one of the most talented women in the business. Lina Kutsovskaya, a fellow Russian immigrant over-achiever, came to NYC in the 90’s after studying painting in Russia. She worked in the art department of Vogue under Anna Wintour, then went to Nylon Magazine with Marvin Jarrett as their Art Director, later Creative Director. Although she met me as a stylist and fashion editor she was one of my earliest supporters as a photographer and gave me several shoots to do for Nylon back in 2002/2003. She left Nylon to launch and design Teen Vogue as their first Art Director and now works as VP of Advertising at Barney’s. Pretty stellar and impressive. I love her, she has such a great presence and is truly phenomenal at what she does. The show at Lombard Freid brings together thirteen established and emerging international photographers whose work has the flavor of a diary (hence the title…) and runs through March 19th.