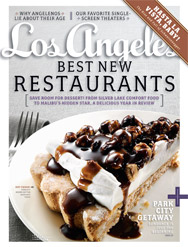 The competition between NYC and LA is fierce on all subjects, especially food. I tend to defend whatever coast is being attacked in my presence since I am eternally attached to and in love with both (I admit I’ve always had commitment issues). For foodies in NYC, there has long been an assumption that the LA food scene is not only incomparable to the overwhelmingly phenomenal scene in NYC but that it continues to be and always will be out-shined by it’s bigger smarter sister on the East Coast. Well, I hate to be the bearer of bad news but that argument is officially dead. This week’s issue of New York magazine is of course fantastic. But this month’s Los Angeles magazine is beyond. It is so full of great places to eat and drink that I probably won’t be seeing my regular table at The Chateau for months while making the rounds to all the new places I want to try. And isn’t the fact that these two covers arrived in my mailbox on the same day just proof once more that great minds think alike?