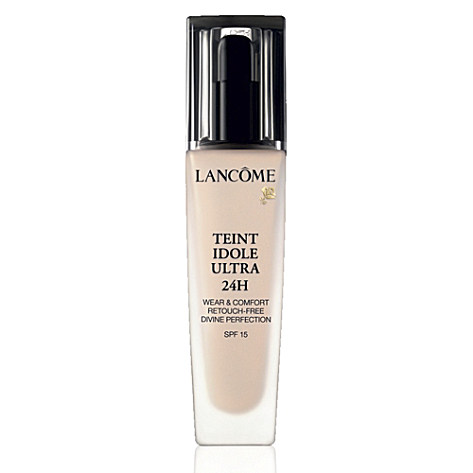 A few months ago I went into Nordstrom’s to restock my foundation which for the last five years has been Laura Mercier‘s oil free in Vanilla Beige. To my horror (yes, HORROR! We women get attached to our make up and toiletries like there’s no tomorrow) I was told they had discontinued it and were relaunching the whole line in a few months with a new formula (what???) so I reluctantly tried the Lancôme Teint Idole Ultra 24H Foundation and then sulked as I paid for it. I didn’t like the strong rubbing alcohol scent of the Lancôme when I applied it and I really didn’t want to switch (I don’t do well with small changes, the big ones I can handle, it’s the little ones that drive me bonkers). Lo and behold, a few months later although Laura Mercier has relaunched it’s foundation I have yet to try the new one and am hooked on the Lancôme. Not only does this foundation give great coverage but it feels better for my sensitive skin; I noticed less break outs and lots of friends have told me my skin looks great, without knowing I had switched foundations. Also the icky smell has disappeared, which may be because I have grown used to it but who cares, it’s gone from my senses and I love this stuff.