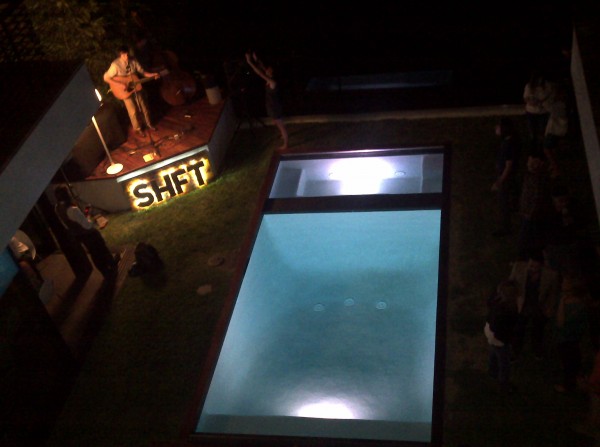 Last night Adrian Grenier and film producer Peter Glatzer celebrated their double Webby Award win for their culturally and environmentally active website SHFT at the Green-Greenberg house in the Hollywood Hills. LA-based singer-songwriter Ferraby Lionheart played a great set while the young crowd made their way through three floors of the eco-friendly house, with visible solar panels on the roof (kind of amazing). SHFT is a new website that Adrian launched with Peter that curates film, fashion, music, art and “a host of resources that speak to a modern, inspirational, eco-conscious lifestyle“. I loved when Adrian said, “there is no ‘I’ in any of us” when speaking to the packed house. The environment has always been one of my biggest passions. I started The Recycling Club at my high school years ago that is still going strong and by the time I got to college I was ready to commit my life to practicing environmental law. Until I realized that meant going to law school so I switched my major to Film. Bard is actually where I met Adrian years ago. He spent two semesters there for his freshman year in the Bard film department, a fact I never let him forget when I see him. Aside from admiring him as an actor I also love what Adrian does for the environment and how active he stays. Last night was a great event for a great cause, glad to be a part of it on some small level. While checking out their site I found this great short film made by Chicago-based photographer Craig Shimala, it’s like a moving painting, I love it.

Floating Chicago – A collection of mirrored skyline timelapses from Craig Shimala on Vimeo.