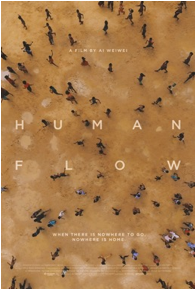 Ai Weiwei’s new documentary, Human Flow, filmed in 23 countries to document refugees all over the world, will be released October 13, 2017. On November 16, 2017 it will be 38 years since my mom and I left the Soviet Union as Jewish refugees with the help of Hias. January 29, 1980 we landed at JFK in NYC, after traveling for two and half months through Europe while Hias raised money for us to get from one place to the next. In that time we lived in small hotel rooms and tiny apartments rented for us by Hias in Vienna and Rome, along with groups of other refugees. We were so very lucky that Hias was taking care of us. Not everyone has that privilege. This trailer and every image of refugees shatters my heart. We must work harder and do more. The official trailer, released today, below.

From the official film press release:

Over 65 million people around the world have been forced from their homes to escape famine, climate change and war in the greatest human displacement since World War II. Human Flow, an epic film journey led by the internationally renowned artist Ai Weiwei, gives a powerful visual expression to this massive human migration. The documentary elucidates both the staggering scale of the refugee crisis and its profoundly personal human impact.

Captured over the course of an eventful year in 23 countries, the film follows a chain of urgent human stories that stretches across the globe in countries including Afghanistan, Bangladesh, France, Greece, Germany, Iraq, Israel, Italy, Kenya, Mexico, and Turkey. Human Flow is a witness to its subjects and their desperate search for safety, shelter and justice: from teeming refugee camps to perilous ocean crossings to barbed-wire borders; from dislocation and disillusionment to courage, endurance and adaptation; from the haunting lure of lives left behind to the unknown potential of the future. Human Flow comes at a crucial time when tolerance, compassion and trust are needed more than ever. This visceral work of cinema is a testament to the unassailable human spirit and poses one of the questions that will define this century: Will our global society emerge from fear, isolation, and self-interest and choose a path of openness, freedom, and respect for humanity?

World Humanitarian Day (WHD) is held every year on August 19 to pay tribute to aid workers who risk their lives in humanitarian service, and to rally support for people affected by crises around the world.
#NotATarget