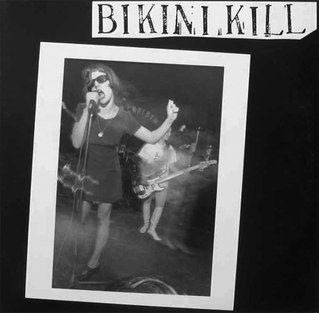 Legendary Olympia babes Bikini Kill just reissued their self titled first EP. It came out in 1991 and was recorded in DC and produced by Ian MacKaye. 1991 is a magical year for many reasons aside from being the year I graduated high school. I remember Bikini Kill well. 1991 was also the year I went to the last Positive Force show in DC, that night Government Issue played one of their last shows as well. I was still organizing punk all ages shows in Baltimore and had just started talking with Ian about playing a show with Fugazi, who I had recently seen play their first show in downtown Baltimore. That show never happened but a few years later Ian agreed to be in my senior film project at Bard. It was a magical time all around. Watch the gals perform “Suck My Left One” live below.