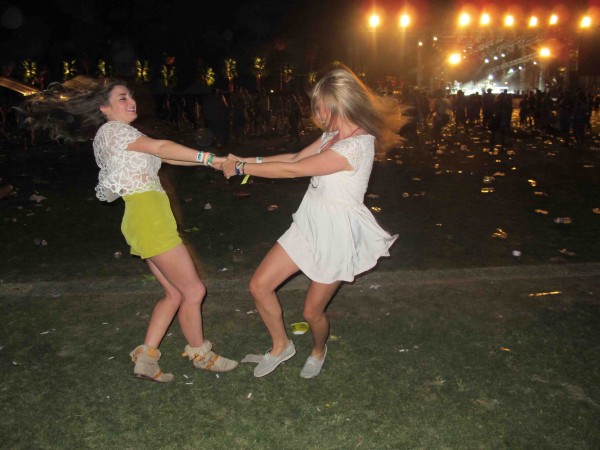 When I was in high school (and straight edge) I used to say music was my drug. Well, last weekend I spent three days getting high on music at Coachella for the third time in my life and it just gets better and better. All in all it is a sublime spiritual experience to be surrounded by so much talent and so much amazing music. I saw everyone… The Kills, Mumford & Sons, Empire of The Sun, The Strokes, PJ Harvey, Kanye and everyone in between. I loved new comers Foster The People who look like they all stepped out of a model apartment in Milan, but can actually play music. And sadly I missed Two Door Cinema Club on Sunday and WarPaint and Cut Copy because Friday was a bit of a cluster…. It was an amazing weekend though. I skipped most of the parties in exchange for the music and spent it doing some work while hanging out with friends from NYC. There is always some sort of interesting twist to Coachella and this year it was the party at Sean Parker‘s house (three in a row actually though I only ended up going to one) followed by a pool party the next day for Lacoste where we chatted with the Winklevoss twins about music. Weird and wonderful in the best way. Georgiana and Daisy dancing in the late night field of Coachella 2011, above.