Nobody Loves a Genius Child 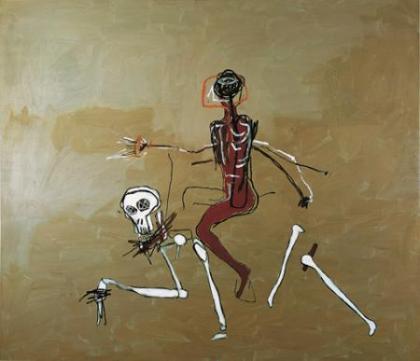 Tamra Davis’ documentary on Jean Michel Basquiat is absolutely extraordinary, beautiful and heartbreaking. There is so much real genius in Basquiat’s paintings and the energy of both his life and work resonate powerfully throughout the film. Nothing breaks my heart more than an artist whose voice is silenced not just too early in life but by his own hand, through addiction, overdose. Senseless and avoidable deaths that only perpetuate the myth that an artist has to maintain a sense of sadness, pain or melancholy throughout their lives in order to hold onto a certain quality in their work. It’s true that often times real genius is unprepared for the cult of celebrity and most people are not equipped with the tools that it takes to survive and navigate a sea of hungry wolves much less when combined with ones own demons. And yes, there is a beauty that comes out of pain sometimes but it’s not required. Teeter tottering between an artists’ world and a world of “reality” is difficult and only made worse by the overwhelming sense of being tugged at in every direction, not knowing who to trust and feeling alone in a world that remains constantly overcrowded.

The scenes of ‘old’ NYC are beautiful as well. I miss the city I never really got to experience… I saw glimpses of it on my visits in the late 80’s as a teenager but by the time I moved to NYC in 1995 the Lower East Side was already starting to change. I won’t lie and say I don’t like all the great restaurants that have sprouted over the last 15 years but there is a grittiness I always loved that is harder to find. Ms. Davis captures perfectly a time when being an artist in NYC wasn’t filled with so many rules and boundaries. She’s created a quiet touching portrait of her friend and artist that underlines not only his exquisite talent and skill but also his otherworldliness that never would have allowed him to survive for long in this one. Go see this film. It’s playing through Friday at NuArt. And visit Alias Books around the corner while you’re there. The best (and seemingly only) used bookstore in LA. Great selection of used art books and fiction.

2 Responses to Nobody Loves a Genius Child