The Lambs Club at The Chatwal Hotel 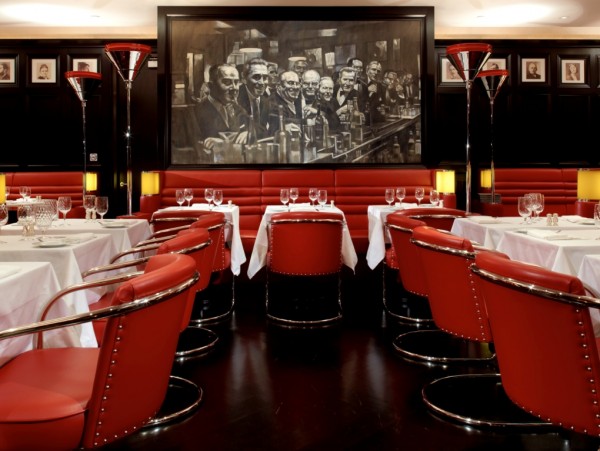 The picture above pretty much says it all. I love and romanticize old New York like any good New Yorker would, even one that has been relocated West as of late. I like to imagine what it would have been like had I been around to wax poetic during Dorothy Parker’s era or sip bourbon with the Fitzgerald crowd. The original Stanford White-designed building that is now The Chatwal Hotel was the epicenter of American theater for the 20th century and opened in 1905 as home to the prestigious Lambs, America’s first professional theatrical club. The hotel’s restaurant, The Lambs Club was this fashion week’s star where a lot of the after parties and dinners took place. I stopped by Tara Subkoff’s Imitation dinner after the show Wednesday night and ended up bumping into some friends upstairs at the Yigal Azrouel dinner as well for a few minutes. I found my way downstairs just in time to sample some great fresh homemade pasta and amazing wines as well as meet David Rabin who along with Chef Geoffrey Zakarian and their other partners Will Regan, Jeffrey Jah and Margaret Zakarian opened the place up only a few weeks ago. The menu looks insane and I am dying to go back to try the remainder of it which includes Veal Sweetbread, Foie Gras Terrine with Black Mission Figs as well as Heritage Pork Chops with Fragrant Endives and Apples. The vibe of the place is very relaxed luxe, which I love and the uniforms were created by the talented duo of Carly Cushnie and Michelle Ochs whose show I sadly missed last week. Apparently Courtney Love was here the other night as well. Definitely a great combo of old and New York. 132 West 44th Street, New York, NY 10036 www.thelambsclub.com