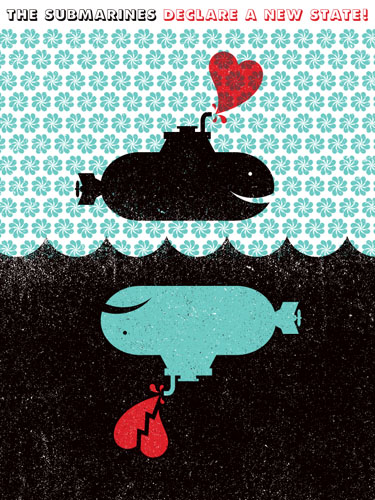 Speaking of my favorite albums of 2008 (see below) that was also the year I discovered LA-based duo John Dragonetti and Blake Hazard who perform as The Submarines. I had their 2nd album, Honeysuckle Weeks on repeat the whole year while going through that horrendous break up I like to reference when refelcting on the good, the bad and the ugly of romance. The band’s story is centered on their own romance and how they broke up after four years, then started writing songs about one another during their break up. The songs they wrote were mastered as a wedding gift when they eventually got back together and they have been playing together ever since. Cute right? Kind of gives us all hope for all that lost love etc… And another cool fun fact, singer Blake Hazard is the great-granddaughter of one of my favorite writers, F. Scott Fitzgerald. The song “You, Me and The Bourgeoisie” and Rilo Kiley’s “Silver Lining” were about 75% responsible for me getting through that break up by the way. Thank goodness for music… And how rad is that graphic on the poster? I still have it from the show we saw at The Echo that same year.

This entry was posted in New Music and tagged Blake Hazard, Honeysuckle Weeks, John Dragonetti, Love Songs, Love Stories, Romance, The Submarines, What To Listen to During A Break Up. Bookmark the permalink.