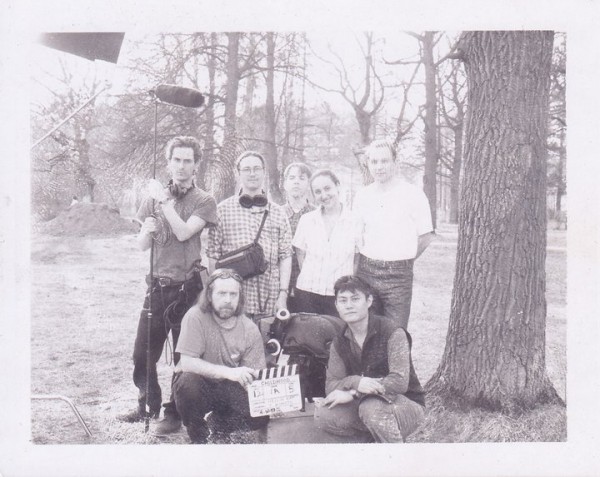 Lately I’ve been thinking about all of the adventurous things I’ve done over the years that have brought me here. I’ve been giving a lot of thought to what is next and how all of the risks I’ve taken the last twenty years, all the seemingly “crazy” unconventional choices I have made have given me the strength to keep following my dreams, which at times is admittedly not easy to do. While I am always doing my best to stay present, and I do love the present, I am Russian and we tend to live and breathe nostalgia so I like to swim through my past and dream about the future a lot. It’s what gives me life. When I was 25, in the spring of 1997, two years after graduating from Bard and one year before I took the job of being Polly Mellen‘s assistant at Allure magazine, I went to Moscow to shoot my first feature film. Or what was supposed to be my first feature. I had been living in NYC for a few years after graduating Bard film school, assisting stylist George Cortina on and off, determined not to get “stuck” in a job which would prevent me from making films so I saved up my money from my job at Calvin Klein (in the men’s collection design department, this was when Stephen Fairchild and Matt Nye were head of design. They left shortly after I started, Stephen went to Milan to launch his collection and Matt went off with his new boyfriend Rolling Stone publisher Jann Wenner… Not long after that Tess Giberson came on, which is where she and I met). So that spring of 1997, after several trips back and forth to Moscow to cast the film and location scout, I finally left the Calvin job for good and went off with my small crew to Moscow to make a film. My Bard friend Dale Cannady came with us to help produce it and Tsuyoshi Kimoto, who I found through a listing I had posted, came along as the cinematographer with way too much equipment to make the Russian customs guys happy. We spent two weeks all of us living in a two bedroom apartment I had rented on the outskirts of Moscow, shooting as much as we could until I ran out of money, hence, the feature soon became a short. The guys left after the shoot but I stayed on for another couple of weeks to earn some cash to pay my actors who were wonderful. I went to the newly opened Russian edition of Marie Claire to see what kind of work they had, since I did work in fashion in NY and they ended up hiring me to style a few shoots, which is how it all began. I loved styling from the moment I pulled my first sample. Styling felt a lot like directing to me, the photographer was my DP, the models were my actors and I could create stories and play dress up with live dolls! Hello heaven. Marie Claire asked me to stay on and work with them in Moscow but I had to get back to NY to edit the film and take it to the IFFM that September so I declined the initial offer but the seeds were planted and from that moment I knew I wanted to be a fashion editor. Filmmaker magazine did a write up on the film in 1998 and I did end up taking it to IFFM, where Amy Taubin gave it a mention in The Village Voice in her IFFM round up. It was amazing to have her notice the film. That was the last film I made, I was exhausted from the whole experience and fashion seemed so much more “relaxing” at the time. And in a way it was. After assisting Polly for a year, she retired and I got hired as the fashion editor for the newly launched edition of Russian Vogue. It was perfect for me, I had been dreaming of going back to Moscow to shoot more photos and short films and I wanted that fashion editor job so badly. That was just the beginning, there are a lot of stories after this but I will save them for another day. You can watch “Was Once A Girl,” the film we made in 1998 here. Above is a crew photo from the shoot, Tsuyoshi is crouching in the front, Dale is peeking out in back and I am the girl in the middle.